This week is the first time I participate at the challenge held by "The Diva" CZT on her blog.
This week we have to draw a tile with N'zeppel and Flux. Both patterns I'm comfortable with, so it isn't a real challenge to me, but it inspired me to draw this tile.
I used TanglePatterns string #213 as a guide and added some hollibough... so maybe that disqualifies me from the challenge. I dont know.

I like the finished tile very much. It looks free and flowing to me and not that much framed and restricted like the tile I did before (the one with printemps and crescent moon)

I drew this on a tile I made of 300g/m² watercolor-paper with Staedtler pigment liner 0.1 and 0.2. The shading is done with a faber castell 9000 pencil 3B and a tortillion. 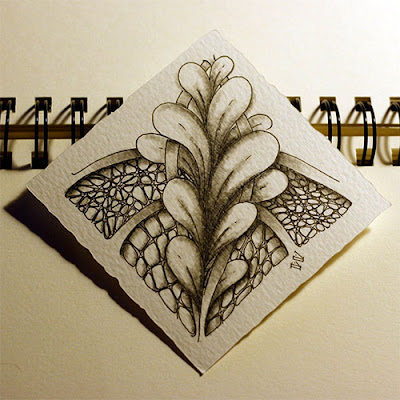 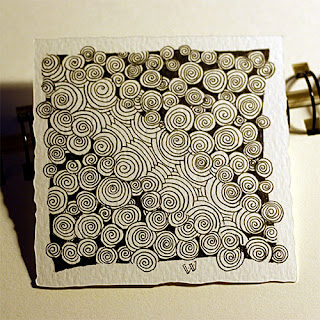 Because of the lesson described at the Primer-book I tried a tile with crescent moon and printemps only. Because I like Printemps but crescent moon isn't one of my favourites. I like to draw it but not its look. So I tried to change it a bit to be more pleasant to my eyes.

It isn't shaded yet, and I'm not sure that I will shade it at all.
But I think I will try this crescent moon/printemps combination again on an other tile.
Eingestellt von Windspiel um 18:33 Keine Kommentare:

Recently I bought a new book, the german translated version of "Zentangle Primer vol. 01" by Rick Roberts and Maria Thomas.

I saw the original book on many english websites to buy from a CZT, but because these are mostly based in the USA it was really expensive to buy for me. Not the book itself, but the shipping costs. And so I ended with looking at the beautiful cover without buying that book.
But now I'm really happy that it was translated to german and I could buy this version easily on amazon. (Thanks to YvonneLi. from A Tangle of Lines who recomended that book! Because without that I woul have missed that there is a german version).

I haven't read the whole book yet, because its more a step by step tutorial and I want to do the lessons described in this book. But I already did the first lesson and because of that I'm a bit more motivated zo draw some zentangles again.
The tangles described in lesson one are crescent moon, hollibaugh, printemps and florz. All these tangles I already tried so they weren't new but never the less I started with them again. And I have to say: I didn't like the tiles I drew with them, so I wont show them to you. But I do like that I started with zentangle again!

I like this book really much. The paper is smooth and a bit glossy and not that thin. It's cover is a lose one, but one difference to the original english version is that its not bound in linen, but it has a linen structure printed on.
Eingestellt von Windspiel um 18:28 Keine Kommentare: